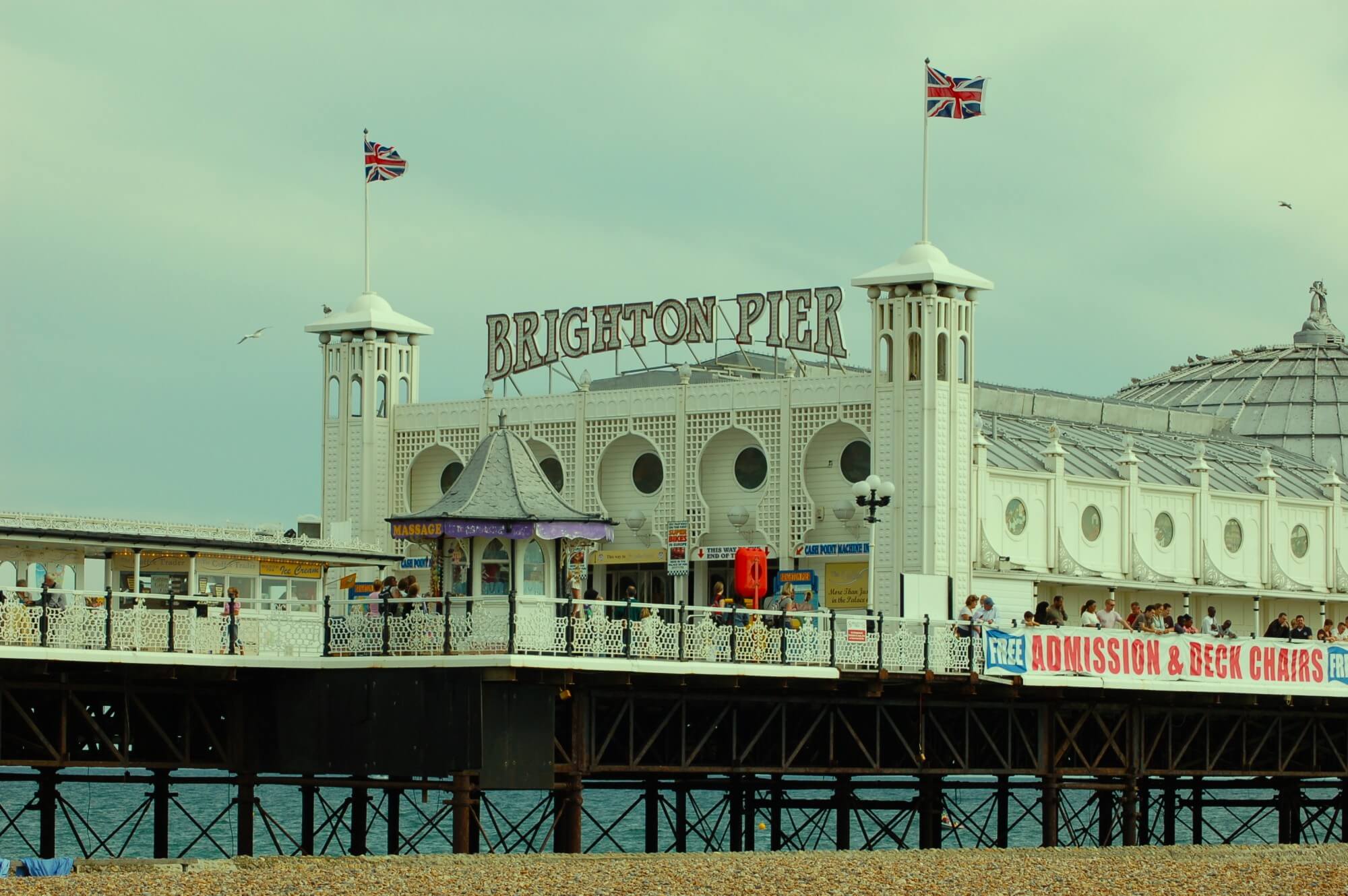 A Saturday in Brighton

After living along the water my whole life, I couldn’t resist the temptation to travel out to the sea for a Saturday at the beach with overdue fish n’ chips, gelato, and arcade games. After an hour train ride to the outskirts of the city, I entered a completely different world. Brighton Beach lies right along the English Channel on the Southeast end of England and is iconic for its half mile long pier and artsy surroundings. But the little treasure’s hidden throughout Brighton made this Saturday one I wouldn’t want to forget.

Even though the forecast predicted rain, the sun was shining the entire day. I guess that’s the beauty of unexpected London weather, huh? The second we stepped off the train, we could feel the seaside air and I instantly felt like I was back home for the day.

Right off of the main street, Brighton hosts a lively weekend market with home-made jewellery, food trucks, antiques, and endless boutiques. The beautiful weather made for crowded back streets but we worked our way along the narrow streets stopping at each and every vendor. You can’t put a time limit (or a spending limit) on a group of girls in streets full of stores.

We finally decided to venture off toward the seaside with our hands full of souvenirs and empty stomachs. At this point, my housemates were very grateful for my mapped out walking tour and planned destinations Susannah provided me with. Even though we’ve gotten very comfortable with asking strangers for directions, it’s pretty nice to have some idea of where you’re headed once in a while.

We continued along narrow bustling streets as we approached the seaside. There was a noticeable change in the temperature as we got closer to the pier which just gave us an excuse to indulge in being tourists that much more. We all treated ourselves to Brighton sweatshirts from a souvenir shop before grabbing a bite to eat along the water.

We obviously had to satisfy our beachside cravings with Fish n’ Chips so we headed down to a hidden spot along the beach that served Fish n’ Chips and mushy peas for only £5. It’s safe to say we were all overly satisfied with the inexpensive but delicious food we received. The long wait for this famous British dish was well worth it.

We then made our way along the beach toward the Brighton Pier. The beach was packed full of people taking advantage of the beautiful weekend weather. This was my first time ever experiencing a pebble beach but I was extremely happy that for once I wasn’t wiping sand out of eyes the entire time. The water was too cold to go swimming but we dipped our toes in for quite some time as week took in the outrageous scenery.

Although I’ve seen countless pictures of the Brighton Pier, it is truly a powerful sight when you are standing in front of it. It’s the perfect place to spend a summer afternoon (especially if you’re still just a big kid, like me). The pier still captures so much significant history with its old-fashioned appearance. As much as I love an average amusement park, I love retro amusement parks THAT much more. It’s obvious they’ve done a really good job restoring the old-fashioned and antique characteristics of the pier over the years. The entrance of the pier alone looks like it should be a vintage postcard from the 1900’s.

Along the Pier you will find everything that an amusement park should be equipped with and more. It’s a mix of Las Vegas and Atlantic City with a much more memorable view. Surrounded by water on all sides, we made sure to indulge in arcade games, carnival rides and of course a photo booth. Despite our efforts, none of us won any money or prizes BUT we did get pretty competitive over a round of bumper cars.

On the walk back along the pier, there is an incredible overlook of the Brighton Wheel on the right and the remains of the West Pier on the left. With the aqua water surrounding us and waves crashing up along the pier, it was a surreal view of the entire city of Brighton.

Even though we wanted to stick around and act like little kids for the remainder of the day, we headed back toward the land to check out the seaside Royal Pavilion. It was built as a pleasure palace in the early 1800’s for the Prince of Wales, George IV. The palace has so many individualistic characteristics that make it stand out from any other architecture in all of England. When approaching the palace, it looks like an 18th century Indian mosque. The landscape on the outside of it is just as extravagant with lavish gardens encompassing the outskirts. We spent a long time just exploring the beauty of the palace and its unique architecture. We’ve done a lot of sightseeing since being in London but the Royal Pavilion was unlike anything we’ve come across yet.

At the end of our spontaneous Brighton trip we checked out the street art along the back corridors of the city. We were all taken back by Brighton’s history, culture and art.

Our last stop was at ‘Sixteen Café’ on the outskirts of the city for some dessert before we got back on the train. In the back of the café there was a small secluded garden with hand-painted murals along the walls. I automatically was inspired by this little seaside town with such a thriving and engaging community.

Thanks to Brighton, for the day I felt like I was surrounded by little pieces of home.