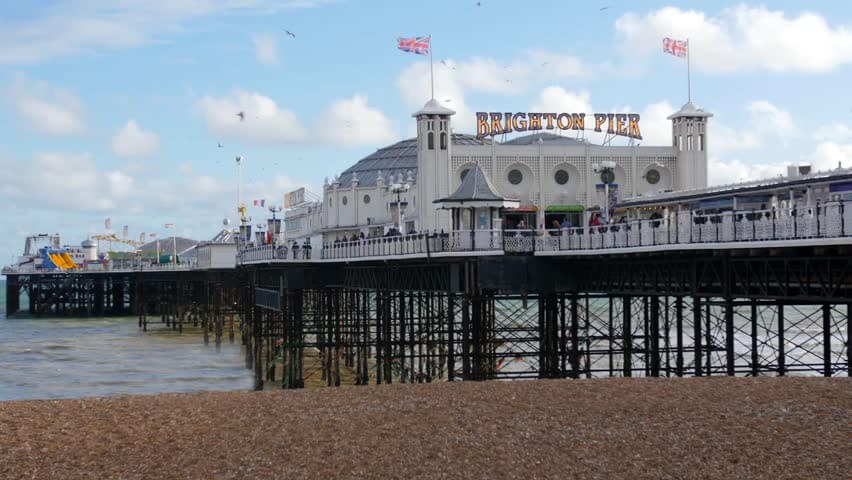 A day in Brighton

Take New Delhi’s architecture, San Francisco’s charm and mix them up with Barcelona’s movida.
Welcome to Brighton, East Sussex!
Now crackling with life, up until a few decades ago it was just an ordinary fishermen’s village, so how did such a striking transformation occur?

When the Royals discovered the benefits of life in Brighton in the eighteenth century, the city and the waterfront began to be adorned with beautiful buildings in French and oriental style, including the magnificent Royal Pavilion, which transformed the fishing village into a small London-on-sea.
The romance between the city and the British aristocracy was unfortunately bound to end, and the kingdom of the austere and rigorous Queen Victoria, who had never really appreciated the relaxed and laid-back lifestyle of the city, marked the end of the idyll.

Brighton didn’t not lose heart and, instead of welcoming haughty members of the English aristocracy, turned into a resort open to all kinds of people, who came from all over Britain and abroad to make the most of the relax and fun Brighton could offer, but also for educational purposes and sometimes to even start a new life.

Brighton could reinvent itself and become a lively cultural, university and artistic hub, a sea harbour that never sleeps. Even the very architecture of the city is a meltin’ pot of different styles and sure it doesn’t go unnoticed: the bright carousels on the pier are the nifty background to the ancient and narrow alleys of the Old Town, framed up by the Victorian railway station, the Georgian buildings and the Indian domes of the Royal Pavilion.

In fact, make sure the Royal Pavilion is on your bucket list: formerly George IV’s summer retreat, its exterior follows the Indian aesthetic canon, whereas the interiors is heavily influenced by the Chinese fashion.
The style of the gardens surrounding the building is genuinely English; make the most of a sunny day with a break on the grass and then head to the Brighton Museum & Art Gallery inside the Pavilion: here you can find diverse collections of Art Nouveau pieces, ceramics, masks and much more. Under the Dome you can also find the Pavilion Theatre and the Concert Hall where such artists like Pink Floyd, Abba, Nina Simone and Jimi Hendrix performed.

Walking away from the Pavilion is like going through a time warp: a few steps away you can admire the modern and groovy Jubilee Square with its minimalistic shiny buildings, the big public library and all the trendy restaurants.
The gleaming shop windows in Churchill Square, the true commercial heart of the city, will plunge you into a shopping bonanza but among the shops and the crowd, you can still find your way through the Old Town, a labyrinth of narrow streets frozen in time bustling with tiny vintage shops and pubs and diners.
Students, tourists and Londoners fleeing from the stress of the city come to Brighton to look for some peculiar piece here in The Lanes, be it a vinyl disc, unique jewellery or funky clothes.
Summer is the ideal time to wander among the stalls and enjoy national and international recipes during the many gastronomic events taking place in the city. Make sure to try the local cider: it’s absolutely fantastic!

Brighton is famous for being a very open city, not only because it’s the gay capital of England with a world-famous gay pride parade in August, but also as the home to a young and cosmopolitan population here to either study or work without giving up the fun.

Ultimately, Brighton is the perfect place to give the right space to the pleasures of life, far from the madding crowd!